This NaNa Belongs to

Buy as Nana/GrandMa/Mamaw or any of your NickName. We can put up to 30 names. We can also do African American Kids or Change the Skin Tone  / Hair Color.

Sometimes it’s hard to be away from your GrandKids. So, why not carry their names close to your heart and for the entire world to see?  Enjoy this 100% cotton, soft and cozy T-shirt customized with your Grandkids names on it.

Show your friends how proud you are to be a Grandma. And bring smiles to those cute  faces when they see their name on your shirt, spreading the joy.

Please read carefully before you order.

Please note that this is a very special T-Shirt Just made for you. So Please make sure to write your kids names carefully as once the product is printed, it cannot be returned because of custom nature of product. If you have any special request, please add that into the note and we will make every effort to get that done.

If you have any questions about the size, Please take a look at the sizing chart provided on the main menu.

Quality is checked before and after printing. After the last quality check, it’s off to shipping, where it’s carefully packed and on its way to you.

You should expect your order to arrive with in 10 Business Days. International Orders may take up to 3 weeks.

So, know you are in good hands, and if you have questions, we are here to help. Please call at (702) 483-9855 or drop us an email at suppport@amazingnana.com

Thanks for Shopping at www.amazingnana.com

The pics were cute but I wonderes how many washes before you couldn't see them clearly. Also it took over a month to receive it... my mom's birthday

D
DH
It could have been better

The colors on the T-shirt were not as vibrant as they could’ve been. It look faded. The T-shirt was an off-white and a very rough material like it had been washed and line dried before it came to me. I ordered this for a special occasion. I will not be ordering again or recommending.

I purchased "this nana belongs to" shirt for my mom and her 7 grands. I love it nd most importantly you placed all 7 in the correct order! KUDOS!!.. My mom loves the shirt & her 7 grands loves it even more. 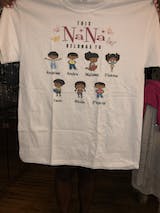 I brought three shirts. Two of the three shirts came and were awesome but the 3rd shirt for my mom was incorrect. I called 3x and left two emails with no response.

I sent a direct message via Instagram, still no response. It wasn't until I posted in one of the Instagram posts, that I got a response.

However, the error was on them - I asked for puffballs for the girls hairstyle and included pigtails as a back-up, in case they didn't have puffballs. I also asked for crewcut hairstyles for all the boys. (4 boys, 4 girls).

When the shirt came, ALL 8 kids had straight hair - no pigtails, puffballs, or crewtops (none of my mom's grandkids have straight hair). They initially offered 25% off, then 50%, stating that the styles I asked for weren't available.

I responded that their Instagram avatar has girls in pigtails, boys in crewtops. And I have not received any response since then. That was on 04/05.

I want a refund for the shirt that was wrong because it is obvious my issue will not be corrected.